The template for the horse-drawn wagon bodies, pre-1900, was continually modified to meet the changing needs of commerce. Martin Bodies produced the Park Auto Body, a wagon body design that found favor with early Ford Model T’s, or for that matter, any similar-sized automotive chassis followed the same route. This pre-1920 advertisement claims, “…a higher standard of quality has been improved to the most modern of standards.” In reference to Martin’s option, the Express Body, which had been developed for commercial use, Martin noted it could up-graded to a depot hack, just by adding seats. For the colder climates, the Express Body was a year round design, adjustable within an hour’s time for any season. It is worth noting that this body assembly was designed for use on any cab/chassis with a factory firewall, cowl, dash and windshield. It was body manufacturers like Martin who offered standardized commercial bodies to suit virtually any chassis built in the first 30 years of the automobile. Hence, the confusion about what was actually a standard factory offering on some early restorations. 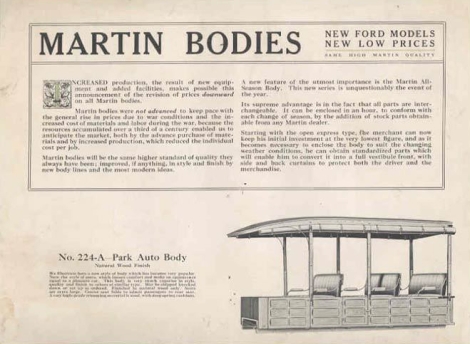